presideNt chiUlli viSits the judO clUb thaT Has insPired a City 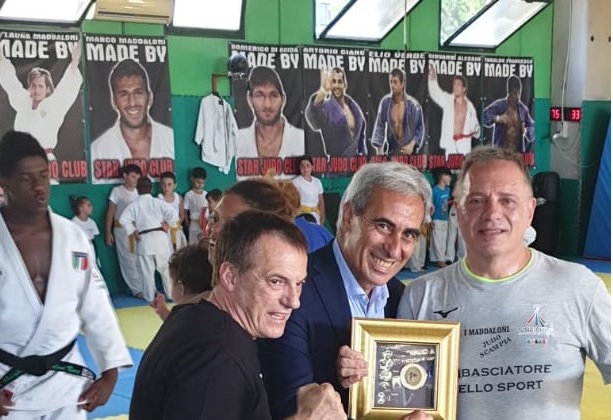 GAISF President Raffaele Chiulli and GAISF Vice President Stephan Fox visited the Star Judo Club in Naples last week to meet its founder Gianni Maddaloni, a man who credits judo with keeping him on the right path and out of trouble. And now Maddaloni is committed to doing the same for the young people in his community.

As part of the International Judo Federation’s (IJF) ‘Judo for the World’ initiative, the International Federation commissioned a series of videos which showcase individuals who have dedicated their time to changing the lives of others in their community through judo.

Based in Scampia, near Naples, one of the most dangerous suburbs in Italy, Maddaloni opened the Star Judo Club in 1992 as a place to care of and inspire local people. After his son Giuseppe won the gold medal at the Sydney 2000 Olympic Games, Maddaloni was able to develop his idea. His mission was to give the community the opportunity to practice a sport, something they had not had beforehand. Many of the young people visiting his gym have no family support network and come from all walks of life.

“Scampia was full of criminals, my own brother died in a prison in Sicily,” Maddaloni said. “Over time I realised that my people had no room to grow. They needed someone to protect them.
“We have children of prisoners at our gym, many families and disabled kids too, immigrants and refugees, all together, all the same.”

By going to the club, these young people are not only learning a sport, but also discipline, respect, social and life skills.

“The great thing my father did was create an opportunity,” Marco said. “That’s why for these kids, judo will always be an alternative to get out of such a tough neighbourhood and keep them off the streets.

“But it’ll also help them in their career, whether that be in judo or in the working world, or even in family life.”

Following his visit to the gym, President Chiulli said:

“Judo is helping to change the lives of people across the world. I had heard about the Star Judo Club and it is wonderful to come and visit the place for myself, in my home country. It is inspiring to see Mr Maddaloni dedicate his time to changing the lives of hundreds of young people through the power of sport.

“At GAISF we believe that youth development programmes and social responsibility initiatives are a cornerstone of our future. We are seeing an increasing number of International Federations launch these projects and we want to support more of our Members to do the same, creating opportunities regardless of background. I am excited to see the role sport can play all over the world.”