Over the past week, Rome, also known as the Eternal City, welcomed 200 skaters from 42 countries who were all vying for one of the coveted quota places available for the Olympic Games Tokyo 2020 skateboarding competition. All of the event podium finishers have now secured their place at skateboarding’s Olympic debut, while the remaining 16 women’s and 16 men’s Olympic berths will be decided via Olympic ranking points. 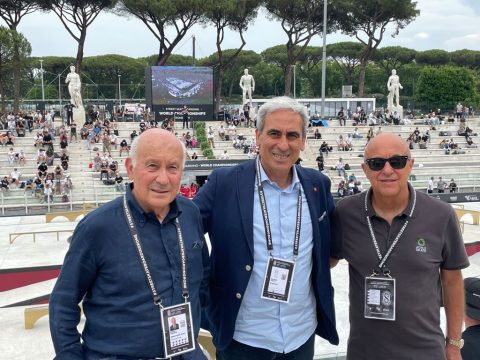 “It was a pleasure to meet with the President and Secretary General of World Skate at the incredible World Skate Street Skateboarding Championships in Rome. It was particularly special to be able to attend a live sport event and witness many talented athletes in action after what has been a challenging year.

“I would like to congratulate World Skate and its President, Sabatino Aracu, on organising this exciting and youthful sports event in the heart of Rome. The global skateboard community is certainly ready to showcase the best of their sport at its Olympic debut in Tokyo this summer.”

World Skate envisages Rome as a key destination for the sport with the city also due to host the Open Street Skateboard, a top-level international contest organised from 2022 to 2025.

“We managed to bring to Italy the second biggest skateboarding event in 2021 (the first one being the Olympic Games Tokyo 2020) thanks in part to the collaboration of Sport e Salute which believed in this incredible project from the get-go.

“The Street Skateboarding World Championships, taking place between the Tennis Internationals and the European Soccer Championships, draws the attention of sports fans worldwide to Rome and we hope the city will definitely be the international protagonist of this new Olympic discipline with stages of the contest already scheduled until 2025.

“We are so proud that with the Street Skateboarding World Championships we brought a sport with a great appeal to the youth here in the heart of the Eternal City, in a perfect match between culture and sport.”