As the festivities of the Lausanne 2020 Winter Youth Olympic Games drew to a magnificent conclusion at the Closing Ceremony in the Olympic Capital last night, GAISF President Raffaele Chiulli reflected on the success of an inspirational youth event.

The eyes of the sports world looked on in great anticipation as Lausanne 2020 provided a blueprint for major event hosting. Cross-border cooperation between Lausanne and neighbouring country France in order to utilise existing infrastructure, two “waves” of athletes utilising the venue accommodation, and using public transport to get athletes from one venue to another are just three examples of the innovative methods that organisers have implemented, and key stakeholders of the Olympic Movement have been quick to praise the successful delivery of the Games.

“I had a very productive trip to Lausanne during these momentous Youth Olympic Games,” President Chiulli said. “I would like to congratulate Lausanne 2020 Organising Committee President Virginie Faivre, her team and the tireless effort of the 3,800 volunteers, without whom this event would not have been possible.

“There has been a real buzz in the city of Lausanne and it was a privilege to watch the young athletes of tomorrow, our future elite sports men and women, on the world stage.”

During his time in Lausanne, President Chiulli met with a number of sports movement leaders, including IOC President Thomas Bach. The meeting with the IOC President was very constructive and reflected the positive collaboration between GAISF and the IOC. President Chiulli also attended the International Olympic Committee Sport and Active Society Commission meeting, of which he is a member. In addition, President Chiulli took to the snow volleyball court in the mountain region of Bretaye in the Swiss Alps last weekend, as a guest of FIVB President Ary Graça, where he played against Olympic volleyball champions in the FIVB’s Snow Volleyball Festival.

President Chiulli also met with the Minister of Tourism and Sports for Thailand, Phiphat Ratchakitprakarn, and presented him with a plaque of appreciation on behalf of GAISF and SportAccord. 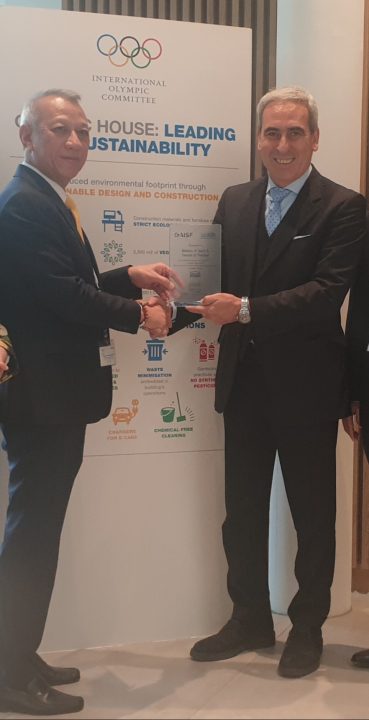 “It has been an extremely productive week where I have been able to meet with a number of IF representatives, IOC Members and sports officials during my time in Switzerland. As well as Tokyo 2020, we are looking forward to SportAccord 2020 in Beijing and a number of World Championships, World Cups and other elite-level competitions. I believe that the next year will be a very exciting time for the global sports movement.”